It isn’t the speed, but the sound which is most surprising. The slapping, whirring, whoosing sound that dominates the air as they fly past you, like brightly coloured insects with odd giant feet and long stick-like arms digging into and pushing away from the snow.

The Engadin Skimarathon is an annual cross-country ski race held between Maloja and S-chanf in the Upper Engadin in early March. It is one of the biggest cross-country skiing events in the world and attracts well over 10,000 participants every year, from professionals to first-timers.

Most participants seem to use the more modern ‘skating’ style, which looks basically impossible, but there are a few traditionalists using the slower ‘classic’ style, which makes them look a bit like they are doing the ‘running man’ across the snow. Either way, it is equal parts mesmerising, awe-inspiring and surreal. Throw in the skin-tight lycra onesies, and you have a sport that is fun to watch even when you have no idea what is really going on.

Onesies aside, it is genuinely impressive. The participants cover 42 kilometres of downhill, flat and uphill race terrain, through some of the prettiest scenery in the area, and there are plenty of places where spectators can stand, watch and offer encouragement. Most of the crowds congregate in the race village or near the finish lines of both the full- and half-marathon (which ends up in Pontresina), but stretches of the track are hardly populated at all, meaning you can really get up and close into the action. It’s well worth finding a spot to watch the pros as they fly by, but also to see the rest of the categories – there are usually one or two hilarious costumes in amongst the lycra. 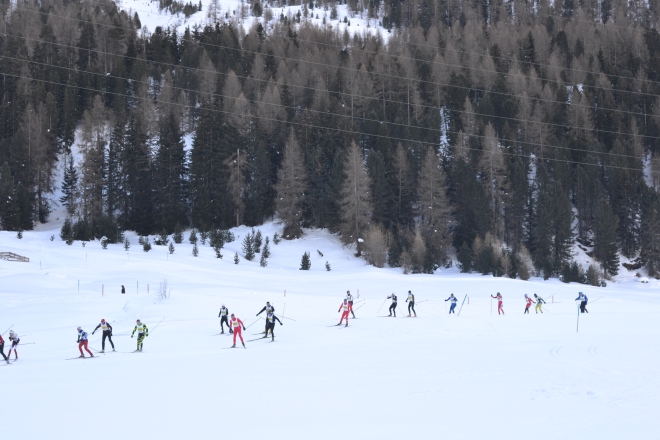